Polymer dispersed liquid crystals, also known as PDLC (polymer dispersed liquid crystal), are liquid crystals dispersed in micron-sized droplets in an organic solid polymer matrix, because the optical axis of the droplets composed of liquid crystal molecules is in free orientation , Its refractive index does not match the refractive index of the substrate, and when light passes through the substrate, it is strongly scattered by the droplets and presents an opaque milky white state or a semi-transparent state. The application of an electric field can adjust the orientation of the optical axis of the liquid crystal droplets. When the refractive indexes of the two are matched, they will appear transparent. After the electric field is removed, the liquid crystal droplets return to their original astigmatism state, thus displaying. It mainly works between the scattering state and transparency, that is, the film itself can be changed between transparent and non-transparent (visual effect is close to frosted glass). The basic working principle of transparency is adjusted by voltage:

1. When the PDLC film is powered off, the polymer liquid crystal materials are arranged disorderly during the period, so that light cannot penetrate the film. The effect seen at this time is the milky white opaque state.

2. When the light-adjusting film is energized, the polymer liquid crystal material in the middle of the film is arranged in an orderly manner under the action of the electric field, allowing light to pass through the film, and the effect seen at this time is the state of a transparent and colorless film.

It is worth mentioning that in addition to being used in the glass, the dimming film can also be used separately on the existing glass. This is called a self-adhesive film, and the PDLC film is really convenient.

At present, PDLC film and dimming glass have been widely used in many fields such as space design, privacy protection and high-definition projection.

What are the applications of PDLC film? 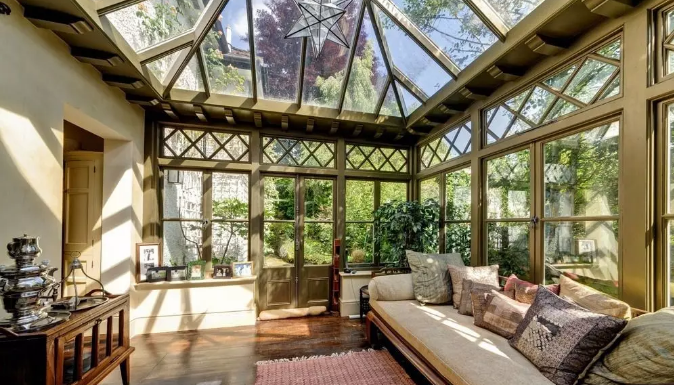 Office and meeting room applications: The office area is inevitably small and boring if it is partitioned by several walls or frosted glass. It is all designed with transparent glass and lacks privacy. With dimming glass, you only need to press the remote control lightly. The glass can be easily manipulated, allowing the glass to quickly switch between transparent and opaque states, allowing the space to be open or closed as you like.

Hotel application: A warm rest place, a place that strives to give people a "home away from home" feeling, and a variety of designs that are convenient for guests are indispensable, and the dimming glass film is novel, beautiful and practical, and is deeply loved by star hotel decorators. Its "transparent power-on and frosted power-off" feature allows the space to be freely retracted and can not only enlarge the originally not spacious space, but also protect privacy when necessary, adding a lot of fun and convenience to the guests.

Projection touch application: When the dimming glass is not powered on, the projector is rear-projected and the ambient light is controlled at the same time, so that the glass can present a clear image, and combined with the infrared touch frame to form a large-size "tablet computer", creating a projection New territory. The most suitable for meetings and teaching.

High-speed rail, subway, high-end automobile, aviation application: The intelligent dimming glass film is transparent and clear, dissolving the rigid lines of space modeling. Either noble and elegant, or soft and bright, it fully reflects the charm of its application. At present, some domestic high-speed rail lines (such as Harbin-Dalian high-speed rail) have already applied PDLC smart film in special-class cars.

Prison application: PDLC smart film has high-efficiency openness and privacy. It is used in prison visit rooms, interrogation rooms, isolation rooms, etc., which is conducive to controlling the visiting and communication time between prisoners and their families and interrogating criminals, avoiding some unnecessary trouble.

Bank counters and business hall applications: Intelligent dimming glass creates a new area of openness and privacy for modern banks, and high-performance privacy functions make the working environment safer. The bullet-proof dimming glass partition used for bank counters is kept transparent during business. Once an emergency occurs, it will immediately turn into an atomized state, so that the criminals lose their targets and buy more time for police officers to subdue criminals and maximize Ensure the safety of personnel.

Shower room and toilet application: Transparent and opaque shower rooms can always give people a sense of mystery. If these two mysteries are combined into one, the sense of mystery is multiplied. Smart dimming glass can instantly control the openness and privacy of the space. When used in shower rooms and toilets, it will not take up too much space, but it can add a mysterious taste to life, which is nothing more than adding color to life.